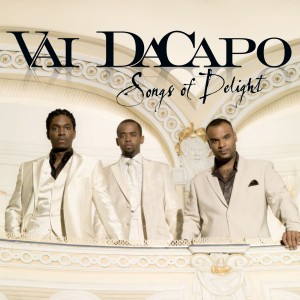 Here’s a recipe for utter delight: take the thrilling vocal power and beauty of three operatically trained singers; couple those voices with some of the world’s greatest love songs. That’s the winning formula for Vai DaCapo on their debut album, Songs of Delight.

The group’s spectacular talent, fantastic rapport and huge charisma are on display in their first televised concert special, which airs during PBS’ pledge drive throughout March 2010. Combining the fireworks of classical singing with the easy and soulful charm of Pop hits, this trio of tenors called Vai DaCapo — made up of Colin Eaton, Joseph Guyton, and Nmon Ford — delivers exhilarating performances that are sure to captivate fans all over the world. The excitement that fuels those performances was born the first time they met. “The first day we were all in the same room together, “ says Nmon, “someone- I think it was Colin- made an obscure Pop culture reference and Joe and I immediately completed his thought. At that moment we knew we were part of something special.”

The trio’s mission is made clear by their name. In Italian, “vai da capo” means “go back to the beginning”—and that’s precisely what these extraordinary singers aim to do on Songs of Delight. “We wanted to revisit music whose message might be missed these days,” explains Colin. “This is music from happier times, when songwriters addressed such topics as hope, inspiration and love, and for whom the words and the message were so very important.”

What Songs of Delight shall remind us of, is that the great songs deserve great singers, and Vai DaCapo Delivers more than that level of excellence. For their debut, these three unique all-American singers perform R&B super-hits like the Jackson 5’s “I’ll Be There,” Smokey Robinson’s “Easy,” Michael Jackson’s “I Just Can’t Stop Loving You,” “My Girl” by the Temptations, Bill Withers’ “Lean on Me,” and Al Green’s “Let’s Stay Together.

Vai DaCapo also provides soaring and inspiring takes on classics such as Whitney Houston’s “Greatest Love of All,” Joe Cocker and Jennifer Warnes’ “Up Where We Belong,” “Say A Little Prayer” written by Burt Bacharach for Dionne Warwick,” Joe Cocker’s “You Are So Beautiful,” Journey’s “Open Arms,” and Simon and Garfunkel’s “Bridge Over Troubled Water.” The men round out their debut with a Neapolitan canzonetta that has become something of an anthem for great singers from Mario Lanza to The Three Tenors: “Torna a Surriento”.

Each member of Vai DaCapo is a marvelous singer with an exemplary musical background. Aproud member of the world-famous United States Army Chorus, Colin Eaton has boosted the spirits of deployed US and Allied Force troops in combat areas that include Iraq and Afghanistan; he also served as a soloist for President Reagan’s interment ceremony. (He calls such a superb and musically saturated community “my second family, who have provided me a musical education beyond measure—every day of my ten years with them has been a master class in singing.”) A tenor whose performances have been lauded in the pages of the Washington Post andthe Baltimore Sun, Colin has carved out a career singing everything from Mozart to Gershwin.

Joseph Guyton was trained at two of the finest musical conservatories in the world—New York’s famous Juilliard School and the Curtis Institute in Philadelphia—before being invited to join the Placido Domingo Young Artists Program in Washington, DC. (Since then, he has performed on opera stages across Spain, France, and Italy as well as the United States.) Joseph says that the experience in Domingo’s program was transformative, mostly thanks to the extraordinary day-to-day example the megastar tenor and conductor sets for the younger singers. “He is so humble and unassuming,” gushes Joseph. “He knows the name of absolutely everyone he works with, from the janitor to the makeup artist to the general director. I think I can say for all of us, the Three Tenors have been real models, but to see Maestro Domingo that often has been such an educationon so many levels.”

A soloist on the triple Grammy Award-winning recording of William Bolcom’s piece Songs of Innocence and of Experience and the Grammy-winning Transmigrations, Nmon Ford (pronounced IN-mun) is comfortable singing everything from opera to soul. Having started his music career at the tender age of three, he is also an award-winning pianist, writer and arranger and most recently provides the vocal arrangements for Vai DeCapo on Songs of Delight. He has soloed with such outstanding organizations as the New York and Los Angeles Philharmonics, Hamburg State Opera, San Francisco Opera, Teatro Delle Muse di Ancona, Los Angeles Opera, the Atlanta Symphony, Cincinnati Opera and the Chicago Symphony Orchestra. One of the favorite career moments for Nmon happened recently during his Italian opera debut. “My birthdayhappened to fall on the opening night and I was feeling sort of homesick. I told maybe two or three people about it but following the performance I heard the sound of drums coming offstage. The percussionists from the opera were playing in honor of my birthday! Next thing I knew- I was linking arms with dignitaries to dance in the stairwell in front of a hundred applauding people. A night to remember most definitely.”

Certain classical superstars have also been hugely influential in paving the way for Vai DaCapo.
Nmon says that one of his greatest experiences with music was first seeing Leontyne Price and bass-baritone Simon Estes performing in the opera Aida on television. “Seeing those artists,African-Americans like me, singing this unbelievable music — I was hooked immediately. The experience transformed me and set my life’s path,” he remembers.

Each member of Vai Da Capo, however, traces his love of music far beyond the realm of just classical music and opera. “I grew up with my grandparents,” reminisces Colin, “and so as a kid I listened to the great jazz artists like Louis Armstrong and Benny Goodman as well as Nat King Cole. Then I discovered rock and roll, but everything changed when I was about fourteen years old. A teacher of mine played Franco Corelli, and I absolutely fell in love!” he laughs. Corelli isan apt hero for Colin: starting in the 1950s, he built a stage and recording career that transcended all genre boundaries with glorious ease and familiarity.

That ease in crossing genres is exactly what Vai DaCapo wants to bring to a new generation of audiences. Nmon explains that for Songs of Delight, “We chose music that was familiar, so that people wouldn’t be starting totally cold with only opera. We bend the classical technique in such a way that it fits really well with the pop songs. It was very important for us to include music with strong melodies and rhythmic variety—and a positive message.”
Joe sums it up this way: “We’ve put our life’s breath into this project because we want to bring music to the world that people not only want to hear but need to hear.”