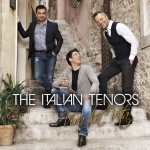 The three have performed professionally in operas for years, so it is all the more exciting for them to be able to combine their classical origins with their soft spot for pop music. Their début album “That’s Amore” broke the boundaries of genres, conjuring up a glorious piece of art with the Tenors’ very own musical energy, which fully captivates listeners. For all of them it is an extremely exciting journey to connect their musical heritage with their passion for popular Italian music. It is incredible how three classically trained artists take a walk in the realm of pop music and have interpreted great Italian pop songs and canzoni in their own unmistakable way. “Viva La Vita” took a step further and exudes the Italian way of life.

Of course, such a blend between the two musical styles has been done before – but only The Italian Tenors can warm your heart after only a few notes. With their personality, their Italian charms and their tuned sophistication that is rarely ranked this high: the three extremely talented opera singers have taken the leap into another field and challenged to win the hearts of their audience. Mirko Provini says: “Our new album mirrors a wealth of emotions. We created a whole new and fired atmosphere with our interpretations of Italian pop songs. The melodically feeling of Bel Cantos, popular orientated music, is timeless and worked both in classical and pop music. And that’s what we wanted to show.”

The three never left their path while they’ve worked on plenty wonderful Italian pop songs. They arranged a musical adventure with passion and abandon combined with talent. “It is for us as Italians to create a breathtaking mix of passion and culture to build our own composed world. That’s always a concept of our work”, gushes Evans Tonon.

Magical moments await the audience, evoked by the opulently arranged fireworks of the sounds of those great Italian pop gems, charmingly and no less professionally celebrated by genuine experts in their field. This cocktail of multifaceted voices performing Italian hit songs with an international flair – this is what makes “Viva La Vita” an especially seductive musical experience, making (not just women’s) hearts beat faster all round!

Brilliant, notable and exciting are just three adjectives the Italian Tenors can be described with. Their new album connects to their traditional sophisticated music, is a homage to Italian songs in generally and tries to bring passion and emotions to a fulminated expression. The tenors made sure that nearly forgotten jewels of Italian music culture were not missing, either. They put a dignified monument to the Italian way of life with their new album “Viva La Vita”.

This tenor, who studied at the Conservatory in Milan and lives in Turin (Italy), this saxophonist, clarinettist and pianist, has been able to combine his musical talent as a singer with his own compositions.

Tenor from Luino (Italy); after studying at the Conservatory in Milan, he performed in a big opera by Mozart and in many concerts as well as cultural events

Baritone from Turin (Italy); his musical talent ensured him a place in the most important operas in Italy. His enthusiasm for Broadway shows, theatre and jazz from the 50s helps him with his eagerness to experiment.